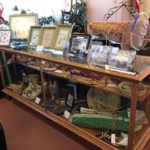 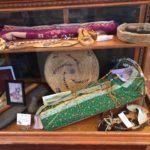 The display has been part of the Museum’s permanent display since it’s opening in 2010. It contains works of art from a local resident the late Agnes Treffry.  She was multi-talented and her works include pictures designed from postage stamps, woven baskets, dolls created from her own egg carton papier-mâché resembling her relatives and drums.  Also included are cradleboards, one created for baby Kara Lacy in 1974, by local resident Cleta Shuster.  Pictures of early Yakama Tribe members and other bead work items from local tribe members are also on display.